Marco Rubio represents Florida in the United States Senate and is a member of the Senate Foreign Relations Committee and the Senate Select Committee on Intelligence. The views expressed are his own.

(CNN)When it comes to President Barack Obama’s disastrous nuclear deal with Iran, it has become difficult to keep track of the troubling new revelations that seem to surface almost daily. Outrageous, potentially illegal, actions by this administration have become so commonplace that many Americans have become numb to the recent news regarding this President’s policy toward Iran. 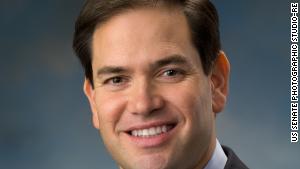 Marco Rubio
We now know the President authorized a $1.7 billion cash ransom payment to Iran, then his administration lied about it to Congress. Only President Barack Obama and supporters of the Iran nuclear deal refuse to accept that the pallets of cash were a ransom payment, even though it was ransom by every definition of the word. This endangers every American overseas by incentivizing kidnappers and encouraging hostage-takers, and since Iran’s release of five US hostages in January, multiple American citizens have been thrown into Iranian jail cells. Providing cash to Iran has also allowed the mullahs to circumvent the international financial system as they shuttle much-needed resources to their terrorist proxies in Lebanon, Syria and Yemen.
We recently learned President Obama dismantled a key part of the ballistic missile sanctions against Iran eight years early. But this past July, the President praised his Iran deal, saying, “We are not taking the pressure off Iran … with respect to ballistic missiles. As I just explained … we maintain the eight years on the ballistic missiles under this particular UN resolution. … So we have not lost those legal authorities.” Once again, the White House lied to the American people about its concessions to the Iranian regime.
The facts are clear. The entity in question is the only Iranian bank designated by the United Nations for providing support to Iran’s main ballistic missile-related organizations, and was described by the Treasury Department as “the financial linchpin of Iran’s missile procurement network.” Ballistic missiles were not supposed to be a part of President Obama’s nuclear deal with Iran, but they became one simply because he negotiated from a position of weakness. He wanted a deal so badly and at any cost that he let Tehran name their terms.
Rubio says he believes ISIS directed Turkey attack 05:30
Just this month, the Obama administration announced Iran will be allowed to conduct US dollar transactions, making it easier for Iranians involved in terrorism to do business.
Having the world see an American president bend over backward to secure such a terrible deal has had far-reaching consequences that go well beyond Iran’s nuclear program.
Before the deal was finalized, President Obama expressed hope that signing it would strengthen moderate forces inside Iran. Nothing of the sort has occurred, as Iran has grown more emboldened by the administration’s efforts to protect the deal whether Iran complies or not.
This is most obvious in the chaos and destruction Iran is sowing across the Middle East. Iran has continued to develop ballistic missiles, a direct threat to our allies in the region, especially Israel. Earlier this year, Iran launched two missiles, one inscribed with “Israel must be wiped out” in Hebrew, according to Iranian officials, and this summer Iran reportedly attempted to launch a modified North Korean missile with a maximum range of 2,500 miles. Iran has also maintained its support of Hezbollah, a terrorist organization that has destabilized the government in Lebanon and is working with Russia and Bashar al-Assad’s regime in Syria.
A senior Iranian official has also stated that Tehran has been providing intelligence to Russia for military targeting, helping Moscow support Assad and his slaughter of innocent Syrians. Russia was also responsible for airstrikes on a UN humanitarian convoy and for decimating Aleppo, formerly Syria’s largest city. This ongoing humanitarian disaster is heart-wrenching, and unlike anything the world has seen in decades.
In Yemen, Iranian-backed Houthi rebels continue to prolong a conflict that has no end in sight. Before the nuclear deal was finalized, Secretary of State John Kerry said in April 2015 that Iran was providing military support to the Houthis. There is evidence Iran continues to provide that support and that the Houthis have directly benefited from Tehran’s windfall from the nuclear deal. In recent days, the Houthis fired missiles at US Navy ships on multiple occasions. However, even as American sailors are attacked by an Iranian proxy, potentially using Iranian-provided weapons, the administration pretends none of this is happening, and is reluctant to condemn Iran publicly.
Despite all this, President Obama naively claims the Iran deal is a success. But with each passing day, it becomes more painfully obvious that this deal has made our country less secure, and the U.S. taxpayer money President Obama gave to Iran is being used to support terrorism and help in the killing of thousands of innocent people in Syria and elsewhere. Those who support this disastrous nuclear deal should be haunted daily by these facts.