Iran, land of the thousand welcomes 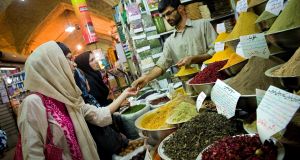 We left Shiraz, the city of poets, around 7am. During our walking tour of the city, we visited the imposing Arg-e Karim Khan fortress with its 14-metre-high circular towers dominating the city centre. We immersed ourselves in the wide, vaulted, brick bazaars with more than of over 200 shops selling Persian carpets, clothes, handicrafts and spices, especially saffron – “red gold”, costing more than gold itself at $65 per gram, which Iran has been producing for more than 3,000 years.

Older women in black chadors brushed pass us, while the younger women in contemporary full-length dress and bright headscarves beamed at us. At the same time the “morality police”, the official enforcers of the strict dress code, kept a watchful eye on everyone, including us 12 intrepid travellers from Ireland and the UK, to ensure we kept our head scarves on.

We took refuge from the heat in the famous Rose Gardens, and Palace and Mosque Gardens, drank tea with the locals wanting to practise their English in their tea houses. The atmosphere at the tomb of the great Persian poet Hafezwas inspiring, where John, an English actor in our group read a poem to claps and cheers from the locals.
Wherever we went, we were greeted by total strangers, not just the women but men and schoolchildren grinning from ear to ear, hands stretched out with fresh apricots, dates, pomegranates or rose petals. “Welcome in Iran”, they would say.

We headed to the Golkuh Lake region as we left Shiraz behind, stopping at the pretty Murgon Waterfalls, before beginning our full-day trek up through twisting and winding paths of the Dena Range (4,409 metres) of the Zagros mountains. This was Yasuj in southwest Iran, surrounded by lush fertile valleys and stunning snow capped mountains. Local families stopped to talk and offer slices of honeydew melon. Their smiles drew us in.

Continuing our trek to Golkuh Lake sitting at 2,600m, we passed young male nomads from the Bakhtiaris and Qashqais tribes filling their cloth back packs with wild garlic, tarragon, mint, bliss and foxtail. Iran with a population of more than 81 million, is modern day Persia, famous for its Islamic architecture, the remains of the Persian Empire and desert towns, but also has one of the largest nomadic populations in the world.

We were conscious of a young male nomad waving at us to follow him up the hill to a sheltered area of the mountain. In front of us was a huge open-plan canvas tent with large Persian rugs covering the earth and 14 members of three generations of the Qashqai tribe smiling and motioning us to sit cross-legged on the rugs. The elders looked on as a granddaughter poured red rose warmed thick and potent tea into metal mugs from a steaming samovar to pass around, and with a hand on her heart said “Welcome in Iran”.