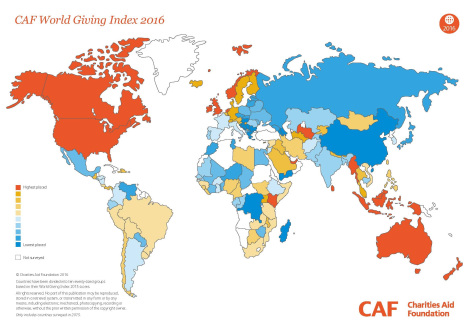 Proving that generosity is not limited to the wealthy, Myanmar has again topped our global index of charitable behaviour. Furthermore, disaster hit nations rank highly on some measures showing the resilience of human kindness.

The CAF World Giving Index, now in its seventh year, is a leading authority on global generosity. By measuring three different kinds of giving, it provides a simple and universally understood picture of charitable behaviour across the world.

The CAF World Giving Index is scored by averaging the percentage of people in each country who donated money, volunteered or helped a stranger in the previous month. For this year’s report 140 countries were surveyed as part of the Gallup World Poll. This allows us to gain data that is representative of the charitable behaviour of 96% of the world’s population over the age of 15 (or about 5.1 billion people). 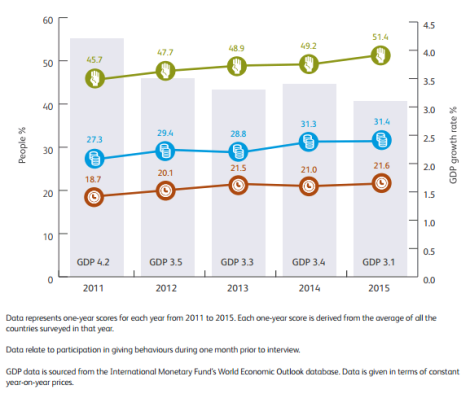 Moderate increases have been seen across our three measures this year and the overall index score for the world as a whole has risen by a percentage point, largely on the back of a 2.2 percentage point increase in the proportion of people who reported having helped a stranger. Indeed, for the first time since we started publishing the report, our data suggests that more than half of the worlds population recalled engaging in this informal kind of generosity (54%).

A perennial challenger, Myanmar has topped the World Giving Index again this year in terms of overall score by pipping the USA – as it did last year – to the top spot. Myanmar’s 2016 overall score is 70%, improving on the record high of 66% it achieved last year. Its ranking is largely driven by high levels of participation by donating money (91%) and volunteering (55%), although it has seen an increase in the proportion of people helping a stranger this year (63%).

As has been discussed before, a widespread commitment to Sangha Dana – giving to support the monastic lifestyle – in the Theravada school of Buddhism likely explains this outstanding culture of generosity. However, there are other nations with high similar demographics in the region (such as Thailand, Laos and Cambodia) and clearly there is something unique and remarkable about the culture of giving in Myanmar. It may be that a sense of hope, and expectations around the elections which took place in November 2015 led to the sharp increase in this years survey. Prof. Dr. Aung Tun Thet, Economic Advisor to the President of Myanmar and member of the President’s National Economic and Social Advisory Council commented that;

Myanmar has been consistently ranked at the top of WGI ranking in the past recent years. The results demonstrate very sharply how a “poor” country can be a “rich” one through its generosity, by focussing on giving rather than getting.

Prof. Dr. Aung Tun Thet, Economic Advisor to the President of Myanmar and member of the President’s National Economic and Social Advisory Council 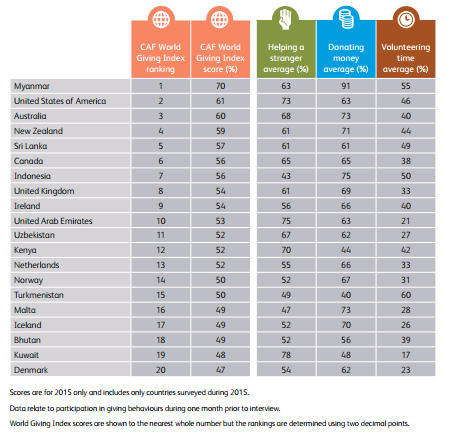 The countries which comprise the rest of the Top 10 remain largely the same as those reported in 2015 with the exception of Indonesia which has risen from 22nd to 7th. This may be due to a shift in survey date resulting in picking up increased generosity during Ramadan though it is a laudable increase nonetheless. Loosing out this year was the Netherlands which fell from 7th to 13th despite gaining a higher overall score. This only serves to demonstrate how at the top of the index, countries are consistently building ever more inclusive cultures of giving.

Outside the top ten, Uzbekistan and Turkmenistan have broken into the top twenty ranking 11th and 15th respectively having been ranked 27th and 71st in 2015. The prodigious leap up the table by Turkmenistan is driven by its volunteering score which jumped from 21% to 60% – it now leads the world on this measure. This increase in volunteering is not unprecedented in Turkmenistan and may well be the result of the government calling for a Saturday volunteering day, known as a Subbotnik. These government orchestrated public works days are arguably mandatary and as such the extent to which this can be understood as volunteering is debatable. It is debate we have engaged in, in the past and we welcome further conversations on the subject.

As has been seen in previous years, some nations have seen notable rises in giving in spite of, and possibly in response to adversity. Iraq is the country in the world where people are most likely to have helped a stranger for the second year running (81%). The ongoing Iraqi civil war does not appear to have dampened the strong heritage of informal giving within Iraq’s communities. Similarly, Libya, which was last surveyed in 2012, the year following the Arab Spring, has also seen an upshift of seven percentage points in that time, against the backdrop of an ongoing and bloody civil war.

Whilst improvement in Iraq and Libya on the measure of helping a stranger seems extraordinary given each country’s security situation, it may be that their increasingly fragile civil societies coupled with greater need amongst the population is encouraging more people to be responsive out of sheer necessity. Indeed, an uplift in generosity of one kind or another in times of crisis is far from unprecedented in our data. Last year we saw significant increases in donating money in Croatia, Montenegro, Serbia and Bosnia and Herzegovina following extensive flooding throughout Southern Europe in May 2014 and Malaysia actually jumped from 71st to 7th in the year before that following an outpouring of generosity towards victims of Typhoon Haiyan in neighbouring Philippines. Societies are incredibly resilient and large scale disasters tend to activate a kind of collective humanitarian response.

However, such a response requires economic, physical and emotional resources as well as some degree of community cohesion. Sadly, these can all be depleted, leaving people without even the capacity to help each another. Kenya’s helping a stranger score has fallen for the first time this year and it is outside of the Top 10 for the first time since 2011. Interviewing took place just five months after 147 people were murdered in the Garissa University College terror attack in April 2015, the latest in a string of increasingly frequent terror attacks and this may be a contributing factor to the decline in score.

A trend that seems to be becoming increasingly pronounced is the rise in the proportion of people giving money to charity in transitional economies – i.e. those which are too wealthy to be considered as economically developing nations but not affluent enough to be advanced economies. Indeed, this group has seen an 11.5 percentage point increase since last year’s index. This only adds credibility to the idea that we should be doing more to create an enabling environment for giving in those countries where people are increasingly finding that they have a discretionary income. Sadly, many nations of all income levels are closing the space for civil society.

As our highest ranked nation Myanmar shows, wealth is not necessarily the decisive factor when it comes to generosity – and it is by no means an outlier. Only five members of the Group of Twenty (G20), which represents 85% of Gross World Product (GWP), appear in the Top 20 countries by five year average. These are Australia, Canada, Indonesia, the United Kingdom and the United States. This is a trend consistent with previous years.

Percentage point changes in scores for each behaviour from 2015 to 2016 report, by economy status – click to enlarge

Indeed, possibly the most striking long term trend in the World Giving Index has been the steady rise of transitional economies – those that are experiencing rapid development but are not yet wealthy. Though those living in transitioning economies remain less likely to donate money (20%) than those living in the developing world (26%), an increase of 2.1 percentage points this year on the back of an increase of 11.5 percentage points last year suggests that the gap is narrowing. Such a trend continues to support the suggestion that as people become financially able, they are likely to be more willing to give money to charitable causes. This signals the huge potential – one which CAF has highlighted as part of its Future World Giving project – for the emerging middle classes in transitional economies to support philanthropic activity in the world’s fast growing economies.

Through its Future World Giving programme, CAF has developed a framework of more detailed recommendations that, if followed by governments, should future proof the growth of generosity and provide an enabling environment for improved civil society. Further information on CAF’s Future World Giving programme can be found at http://futureworldgiving.org