The world may have lost the opportunity to keep global warming under 1.5 degrees Celsius (°C) above pre-industrial levels. The 1.5°C global warming threshold is likely to be breached in the next 10 to 20 years (by 2040) in all emission scenarios, including the one where carbon dioxide (CO2) emissions decline rapidly to net zero around 2050, the intergovernmental panel on climate change (IPCC) said on Monday.

In a stark warning to world leaders, the 42-page summary for policy makers titled: Climate Change 2021: The Physical Science Basis drafted by 234 scientists from 66 countries warned that global warming of 1.5°C relative to 1850-1900 levels would be definitely exceeded under intermediate, high and very high emission scenarios and will be “more likely than not to be exceeded” even when countries agree to switch to net zero emissions by 2050.

A net zero emission target implies that all human-caused greenhouse gas (GHG) emissions are balanced out by removing GHGs from the atmosphere in a process known as carbon removal.

The IPCC report also underlines that human actions still have the potential to determine the future course of climate change and can strive to keep global warming under 2°C. The Paris Agreement goal, agreed upon by 195 countries, is of limiting global warming to well below 2°C and pursuing efforts to limit it to 1.5°C.

There is a near-linear relationship between cumulative CO2 emissions from anthropogenic sources and global warming, the report has shown. Each 1000 GtCO2 of cumulative CO2 emissions is likely cause a 0.45°C increase in global surface temperature. This relationship implies that reaching net zero anthropogenic CO2 emissions is a requirement to stabilise global temperature increase at any level because of a very limited carbon budget, the report said. 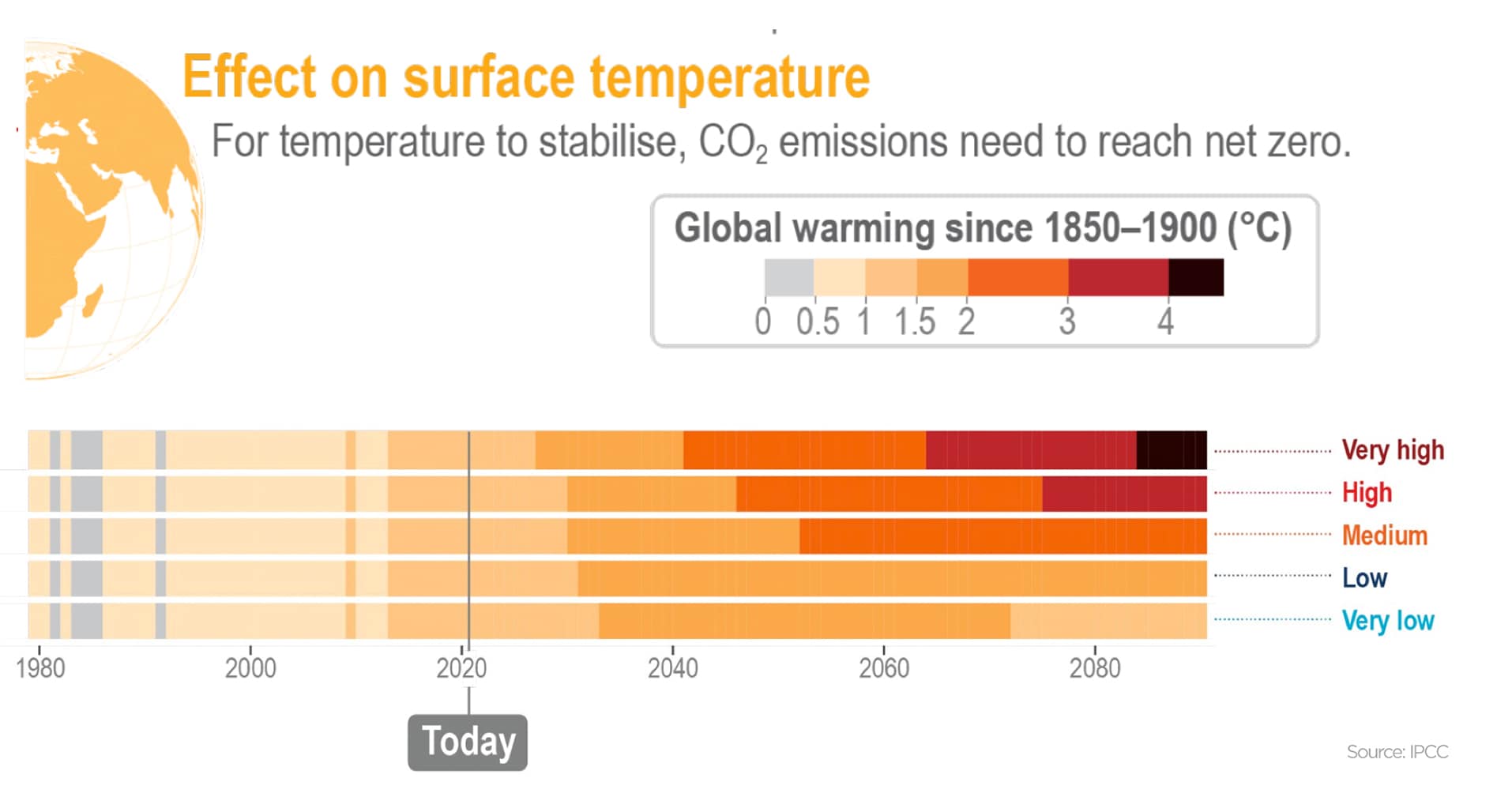 “Stabilising the climate will require strong, rapid, and sustained reductions in greenhouse gas emissions, and reaching net zero CO2 emissions. Limiting other greenhouse gases and air pollutants, especially methane, could have benefits both for health and the climate,” said IPCC Working Group I Co-Chair Panmao.

The report shows that emissions of greenhouse gases from human activities are responsible for approximately 1.1°C of warming compared to pre-industrial levels, and also shows that averaged over the next 20 years, global temperature is expected to reach or exceed 1.5°C warming.

“Warming is an established fact. We are seeing widespread and rapid changes in every region of the world, affected in multiple ways by this changing climate. This includes heatwaves, heavy rainfall events, droughts, compound extreme events see kit in every region of the earth. There is no going back from some of these changes even if we limit warming to 1.5°C. Compound flooding events, storm surges, etc. will continue. From a physical science point of view, it is still possible to limit global warming to 1.5°C and that would mean these changes could be slowed. If we reduce GHG emissions to net zero by 2040 there is still a two-thirds chance to limit global warming to 1.5°C and if we manage to reach net zero emissions by middle of the century there still a one third chance…” said Friederike Otto, associate director, Environment Change Institute, University of Oxford. 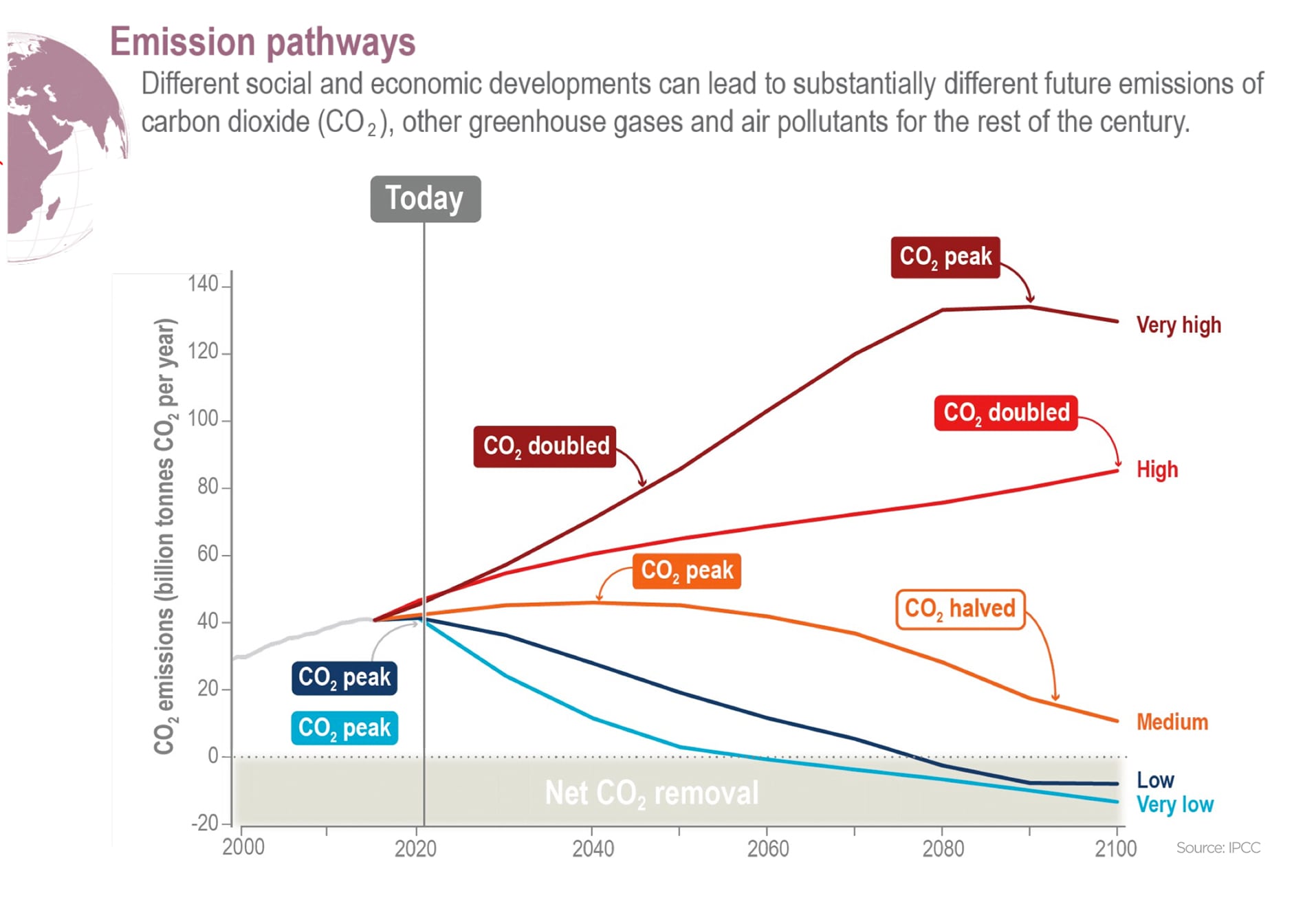 As we head towards 1.5°C warming, there will be an increasing occurrence of extreme weather events which are unprecedented in the observational record, the IPCC said, adding that with every additional 0.5°C warming there will be a discernible increase in intensity and frequency of hot extremes, including heatwaves, extremely heavy rain events as well as agricultural and ecological droughts– a period with abnormal soil moisture deficit, which happens due to rain deficit and excess evapotranspiration.

Global warming of 2°C is extremely likely to be exceeded between 2041 to 2060 in the intermediate scenario when emissions decline slowly. Global temperature rise is likely to be 3.3°C to 5.7°C by 2100 under the very high greenhouse gas emissions scenario where little action is taken to reduce emissions. The IPCC considers five socioeconomic Pathways (SSPs) which are essentially possible paths of growth human societies could follow over the next century.

SSP2-4.5 or the intermediate scenario most closely mirrors the emissions trajectory that the total ambition of climate pledges (NDCs) submitted by 195 countries currently has us on. CO2 continues to rise and stabilise around the mid century, before finally starting to decrease, with the steepest drop just before the end of the century in this intermediate scenario according to a plenary note for media. Under this scenario we are headed for a 2.7°C rise in global temperature by end of the century.

The last time global surface temperature was sustained at or above 2.5°C higher than 1850–1900 was over 3 million years ago.

“This report reflects extraordinary efforts under exceptional circumstances,” said Hoesung Lee, Chair of the IPCC in a statement. “This report is a reality check. We now have a much clearer picture of the past, present and future climate, which is essential for understanding where we are headed, what can be done, and how we can prepare,” said IPCC Working Group I Co-Chair Valérie Masson-Delmotte.

IPCC however clarified that occurrence of individual years with global surface temperature rise of 1.5°C or 2°C, relative to 1850–1900 does not imply that this global warming level has been reached.

Some mid-latitude and semi-arid regions, and the South American Monsoon region, are projected to see the highest increase in the temperature of the hottest days, at about 1.5 to 2 times the rate of global warming. Extremely heavy rainfall events will intensify and become more frequent in most regions with additional global warming. At the global scale, extreme daily rain events are projected to intensify by about 7% for each 1°C of global warming. The proportion of intense category 4/5 tropical cyclones will increase and the Arctic is likely to be practically sea ice free in September at least once before 2050 under all the five scenarios considered in the report.

“The IPCC numbers sadly show that as humans we have failed to curb the emissions that would have kept the global warming under 1.5°C or 2°C limits. The mitigation and adaptation strategies submitted by nations through the Paris Agreement are insufficient, and we have even failed to reach near the committed curbs on emissions,” Roxy Mathew Koll, climate scientist, Indian Institute of Tropical Meteorology.

“This points to the fact that we need urgent measures to evaluate and adapt to the increasing risk due to intense cyclones, floods and heatwaves in the near future. While climate change is global, the challenges are always local. IPCC reports provides only a global assessment, and it is our task to identify the local challenges and disaster proof those regions where the risk and vulnerability is the highest.” He added.

“The present assessment report is based on much improved climate models and also using more observed and paleoclimatic data. Therefore, future projections of the climate could be considered to have reduced uncertainty…India should raise to the occasion and plan how to mitigate things. We need to develop technologies for mitigating these extreme weather events. Prediction capability should be improved. Disaster management system should be strengthened. A lot of coordination should happen between ministry of earth sciences, national disaster management authority (NDMA) and state governments also participation of industries. We should not delay. Anyway, MoES has plans to improve their forecasting skill of extremes,” said M Rajeevan, former secretary, ministry of earth sciences.

The IPCC projections are expected to be a wake up call for world leaders ahead of UN climate negotiations (COP 26) in November. “The new IPCC report tells government leaders exactly what is at stake at COP26. Without rapidly cutting carbon dioxide emissions to net zero levels, we are headed for a 3°C hotter world with more frequent weather extremes, and dangerous disruptions in the climate. It is high time that developed countries seal the deal on adaptation finance and clean technology partnerships at COP26,” said Ulka Kelkar, director of the climate programme at the World Resources Institute, India.