One of the most powerful typhoons to ever hit the Philippines destroyed houses, tore roofs off schools and ripped giant trees out of the ground on Thursday.

Super typhoon Haima hit the northern province of Cagayan late on Wednesday night with winds almost on a par with catastrophic Haiyan, which was then the strongest storm to strike the disaster-prone south-east Asian archipelago and claimed more than 7,350 lives in 2013.

Haima roared across mountain and farming communities of the northern regions of the main island of Luzon overnight, and by morning a picture was emerging of widespread destruction.

“Rice and corn plants as far as the eye can see are flattened,” Villamor Visaya, a university teacher in Ilagan, one of the main northern cities with a population of 130,000 people, said.

“Many houses were destroyed. I saw one school building crushed under a large tree … it was as if our house was being pulled from its foundations.”

Haima hit coastal towns facing the Pacific ocean with sustained winds of 225km/h (140mph), and wind gusts of up to 315km/h.

It weakened overnight as it hit mountain ranges and by 9am on Thursday was leaving the western edge of Luzon, heading towards southern China.

Jefferson Soriano, the mayor of Tuguegarao, the capital of Cagayan where Haima made landfall, reported badly damaged schools and gymnasiums where people had sought shelter.

“They are calling for help because the roofs have been torn off. The problem is, our rescuers here are unable to go out and help,” Soriana told DZMM radio before dawn. 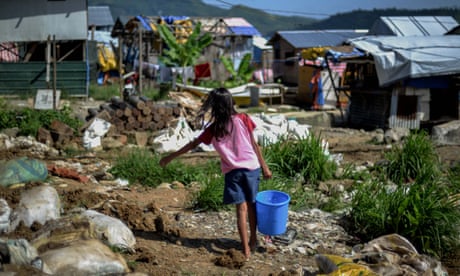 Rebuilding after Typhoon Haiyan: ‘Every time there is a storm I get scared’

President Rodrigo Duterte said on Wednesday night all possible preparations had been made for Haima, with tens of thousands of people evacuated, but he still struck an ominous tone.

“We only pray we be spared the destruction such as the previous times, which brought agony and suffering,” Duterte said in Beijing, during a state visit. “But we are ready. Everything has been deployed.”

About 10 million people across the northern parts of Luzon were at risk, the government’s disaster risk management agency said on Wednesday.

The Philippine islands are often the first major landmass to be hit by storms that are created over the Pacific ocean. The south-east Asian archipelago endures about 20 major storms each year, many of them deadly.

The most powerful and deadliest was Haiyan, which destroyed entire towns in heavily populated areas of the central Philippines.

The capital of Manila is about 350km south of where Haima struck land.

However the city, with about 12 million people, was not affected, hit only by moderate winds overnight and little rain.

Haima was the second typhoon to hit the northern Philippines in a week, after Sarika struck on Sunday claiming at least one life and leaving three people missing.